Flower Essences for Dog Agility: From Frustrated to Focused! 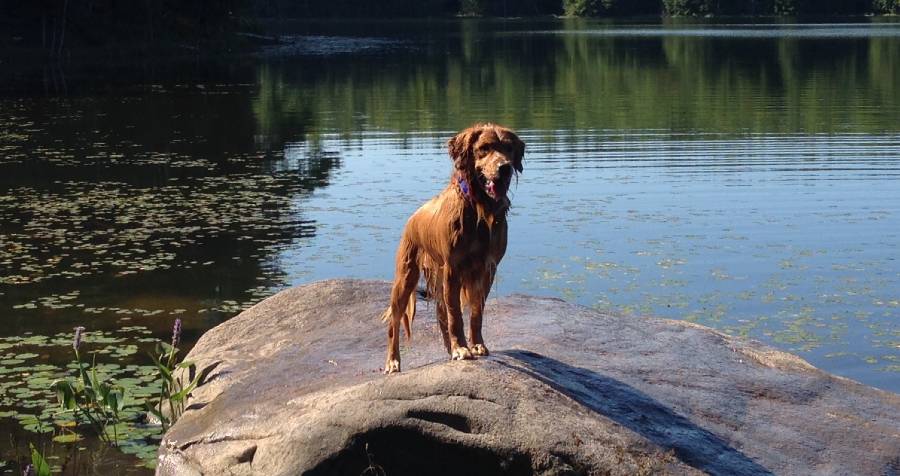 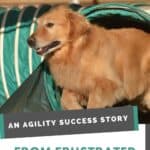 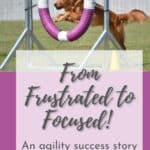 Flower essences offer more than stress relief for anxious and fearful dogs.  Flower essences can also help with focus, patience, self control – and even basic confidence. Find out how flower essences helped Ellen and Finn go from “frustrated potential” to a focused, working agility team!

Finn is an 8 year old field-lines Golden Retriever, loved and trained by Ellen McDonald. Ellen and Finn have struggled through agility for years, despite a lot of frustration. Ellen is no quitter, though, and last year she happened upon Aldaron Essences.

Aldaron Essences: Welcome, Ellen! Tell us a little about Finn and his background.

Ellen: Finn came to me as a 9 week old puppy. I was looking for a pet. The breeder had field Goldens and she felt since Finn was quiet and a loner he would make a good pet.

I already had a 4 year old Border Collie, again as a pet. It wasn’t long after getting Finn that I decided to dip my toe into agility. I never even considered it as a sport with my border collie, even though the BC had 9 siblings, all performance dogs.

So, I started taking classes. I was a first-time handler who had no experience. Finn is not your normal golden retriever. He’s not one to sit on the couch with you. Finn will take himself into another room and sleep. He tends to spend his day sleeping in his crate or outside alone on the deck.

Finn is a dog that never wants to be wrong, so he tends to take off in the training ring if I’m not very clear on what I want. My trainers and friends said he was ‘soft’ (couldn’t handle being wrong). I think this may have caused him some anxiety.

We continued training and eventually went to our first trial. Between my nerves and Finn’s personality it didn’t go well. I then added to my stress by training my now 9 year old Border Collie. He was a completely different dog and each dog had different ways of learning. I eventually stopped trialing with Stitch (the Border Collie) for numerous reasons.

Finn and I continued trialing, and honestly it wasn’t pretty. I wasn’t consistent with my commands and poor Finn turned himself inside out to please me.

I honestly can tell you that we are connecting in the agility ring and actually qualifying most weekends. What is more important to me is that Finn and I are becoming a team.

I know I’m less stressed and I’m able to focus on giving Finn information in a timely manner and that takes the stress off of Finn. I’m actually enjoying myself; whereas before I dreaded going into the ring. 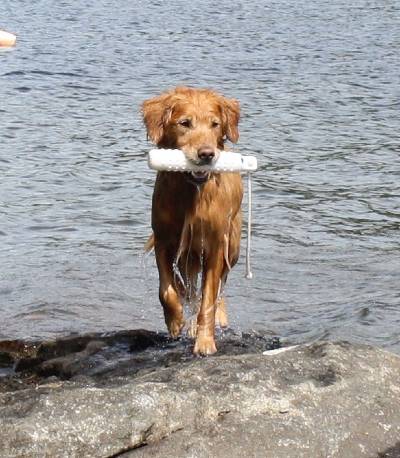 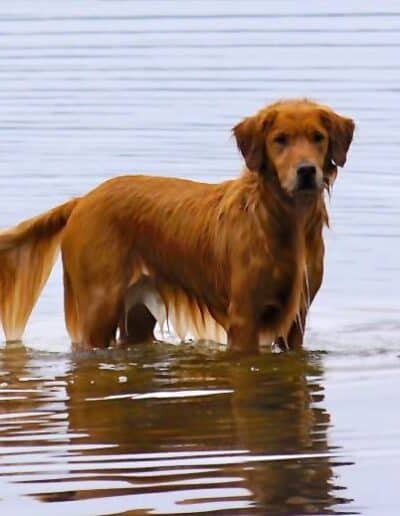 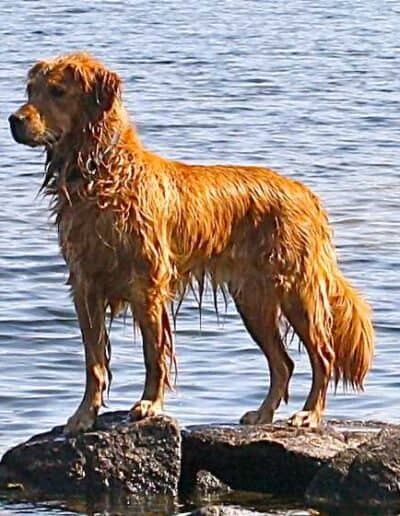 Ellen: Honestly, we tried all different types of training; anywhere from stroking and petting him when we went into the ring; walking out of the ring if he broke his stay at the start line and not rewarding him after a run. Nothing seemed to faze Finn.

Aldaron Essences: Can you describe the differences you’ve seen?

Ellen: OMG… he stays at the start line. He stays focused in the ring, never leaves me to go greet the ring crew or judge. We are a Team!

Aldaron Essences: What was the most helpful training or lifestyle change you made?

Ellen: Consistency. I have a very specific routine prior to going into the ring at a trial. I don’t deviate from my routine.

Aldaron Essences: Which accomplishments are you are most proud of?

Ellen: Finn has a start line stay and he’s focused. And my nerves are still there but I feel I can control them.

Ellen: I want to continue trialing with Finn, and I want him to be a happy dog.

Ellen: Having a consultation with Julie was the best money spent. If nothing more, I actually sat and thought about my issues with Finn.

I was a little skeptical that flower essences are real, but I will say I purchased a book and read about them. It’s amazing when you read the history.

I think the remedy has definitely had an impact on Finn and myself. You have nothing to lose if you try it and everything to gain!

I spent a few days going over the information Ellen gave me on Finn, in addition to our phone consult. She also sent me several videos of their agility runs, which I ended up watching over and over, to be sure I was getting a good sense of Finn.

Finn obviously has some very positive qualities. He’s got natural intensity and good drive, both very helpful in an agility dog! He also likes to get things right; that is, being right is important to him.

There were several aspects of Finn’s personality that were causing Ellen difficulty.

Finn tends to be impatient with doing what he wants to do. He dislikes being held back from it (such as holdbacks at the start line).

His behavior gets into strong patterns (which can be good if it’s a pattern you’re working on reinforcing, bad if it’s a rut you’re trying to get him out of).

He is strongly affected by the energy (noise, commotion, personal energy) of people and the environment around him, and when this happens, he has trouble maintaining a calm, cool control of himself.

From the trial videos Ellen sent, I could see that Finn appeared almost erratic (rather than a more common “wee, woohoo” attitude) when something or other would make him get out of his groove when running agility.

Most of those reactions are addressed in my Hyper-Drive formula (my flower essence blend for over-stimulation and over-arousal), so I knew those essences would be included in Finn’s custom blend.

But as I watched the videos over and over, I could see that Finn seemed to me to be awfully sensitive to certain things which, once they happened, totally threw him off. Things like noises in the environment (his name being called, dogs barking), being physically held back by Ellen, making a mistake, and possibly uncertain leadership.

Those last would call for a different set of essences.

So, Finn’s custom formula consists of nine flower essences. In this case, I chose a combination of Bach and North American essences.

Here’s why I picked each one:

And how are Finn and Ellen doing after several months?

From a recent note from Ellen:

“Finn is really doing well in agility. A few weeks ago he finally got his Excellent Standard title, which is a huge accomplishment for us.

I never thought Finn and I would be in a place where we actual can start moving toward his MACH.

Granted we have only begun but it was never even in my dreams. We are much more focused as a team. I actually enjoy going to trials now that we actually compete 🙂 ”

I hope you enjoyed this flower essence case study. I love Ellen’s and Finn’s story because it illustrates that it’s never too late to succeed.

Thank you to Ellen – and Finn – for hanging in there. Best of luck to you in realizing your dreams!

Julie Cantrell CBDC BSc is a professional dog trainer and canine behavior consultant who’s logged many thousands of hours training dogs and teaching owners since 1990. Flower essences have been part of her work with canine behavior since 1994. (bio)
Share article
TwitterFacebookPinterestLinkedInEmailPrint